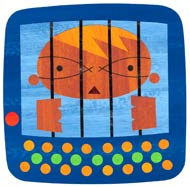 You see them everywhere. On the subway, on the bus, walking down the street, in stores, in restaurants, and at gas stations. When did it happen? When did the ear-buds start entering the ear drums of so many, shutting out the sounds of so much modern day life. Is it enough to enjoy your private playlist of your life, or is it too much isolation and shutting out of everyone else. The victims of the ear-buddotry seem so dead to the world around them. Is it life-fulfilling, or life emptying?

The ear bud became a silly part of Brian Williams' current slip down journalistic standards during the 2008 Olympics, when he asked Michael Phelps on Nightly News what he listened to on his i-pod before his last swim victory, and whether he took his ear buds out one at a time, or left one in until the last second before the start of a race. Even Phelps seemed embarassed by how far the interview had slipped into the trivial.

Ben Stein makes similar points with regard to the bondage of cellphones and the like in his column for the Sunday NY Times, "Connected, Yes, But Hermetically Sealed" at the following web address: