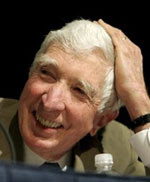 Those simple words made me sigh as I heard the news that a long lasting friend, John Updike, had passed away. The words just took a moment--"acclaimed American author, John Updike died today at 76." But he was not a simple or momentary author; sometimes his sentences looped and swirled like the fancy Palmer Penmanship exercises we used to do in the early grades of school--but no more, replaced by the steady common font of computer life. Occasionally his sentences were duds like a bad Beach Boys song, but mostly they were beautiful evocations of life in its simplest or more complex forms—he seemed in harmony with life. Updike was proficient at the simplest or the more complex and obscure. For his elegance, it did not matter. He could be elegant with the mundane and usual as well as the grandiose and unusual.

He was an old pal; he has been with me for many years, as I read most of his yearly output. He was one that did not seem bound by time, until suddenly it had run out on him. He seemed close to me, although I only had the pleasure of seeing him read in person twice. He read beautifully each time, and the audience nervously laughed at his swirling sentences. Laughter was a funny sentiment to express at his words. It was almost a nervous but playful excretion or tic that the audience could not hold back.

To meet him afterwards was pleasurable, but you did not know what to expect. One time, he took the book I asked him to autograph, "The Music School" and excitedly told me how the publisher messed up and he proceeded to find the many typos in this edition, marking them and then signing the book. He felt like they had spoiled or soiled some of his best words. But he did not in the end seem to mind or take himself or his words too seriously.

He understood life as we may not have known it; he was its constant chronicler. His friend and student on the Lehrer NewsHour, Nicholas Delblanco, said that Updike experienced life at a faster ratio than the rest of us--his mind was mostly speeding ahead. Delblanco noted that "I always felt in John's presence that he was simply thinking faster and noticing more." His words along with a fine interview with John Updike are at the following web addresses:

John Updike got it. He got life. He took what it offered and rode or ran with it through its many “fairs,” "villages," and "couples," and he was in on the joke, as one of my real friends of many years would say. Updike tried many things and conquered some. And he let us in on it as a constant explorer and companion of life, whether it be through longer fiction, shorter stories, poems or essays--he shared it mightily with us. When he needed to create a new writer from his own writing, he became "Bech A Book." He tried many new things and new places and new personas, and many old things and old places, like his exploration of the mind of a terrorist located in my aging, gritty home town city of Paterson.

He winked at me through his words and pages--I, his friend of the typos--as he journeyed through many generations of life in my home town in an earlier book of his, "In the Beauty of the Lillies," and journeyed with me and for me. He was an old friend of close to fifty years, since my first book with him, "Poorhouse Fair" of 1959, and he helped me see the beauty and the uncommon pleasure of the simpler and more routine things in life, wrapped in the elegance of his writing. Yes, it was a long and deep sigh when I heard the news. "Oh no," I said out loud as I could not hold back the simple statement of an inelegant emotion for a now departed friend.
Posted by 5L at 1:34 AM No comments: 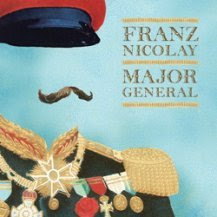 It's a New Year, and "what's nu" is old in "Major General" by Franz Nicolay, the keyboardist from The Hold Steady (the one who is interestingly mustachioed) and accordion/piano player for The World/Inferno Friendship Society. The tracks from the opening track, “Jeff Penalty,” to the end play on many influences from the Who's "Tommy" to "Rent" to klezmer to Billy Joel to Queen to Kurt Weill and back to the work of his own Hold Steady. It is an interesting mix. This punk-cabaret, rock-opera is diverse and eclectic (if not always electric), drifting in and out of times, scenes, and motifs. It's fun....
Posted by 5L at 12:30 AM No comments: