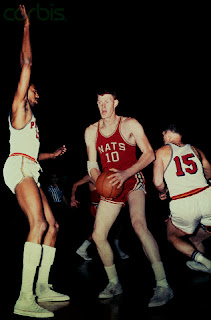 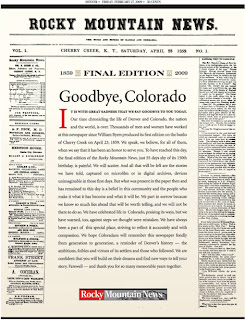 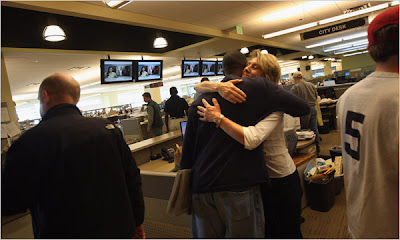 The world seemed to have gotten a little smaller with the demise of the Rocky Mountain News and several other news dailies, and the passing of Johnny (Red) Kerr. While not a reader of the Rocky Mountain News, the pictures and articles about the paper, made it seem like the reader of the News lost a lively part of their lives and an outlet for fine writing and exposes.

The NY Times began its article about the demise with the words "DENVER — This was a wild city once, a frontier of the Western imagination full of brawling, dueling, nakedly self-interested fortune-seekers and empire-builders — and The Rocky Mountain News carried their torch." The picture of hugging and emotion confirmed the deepness of the loss.

The editor of the surviving Denver Post, which once a fierce competitor and more recently a partner in sharing business costs with The Rocky said of its passing, "[t]he first day I wake up not reading The Rocky will be a sad day for me.” Think of waking up without our local papers, the NY Times or the Washington Post, and that would truly be a sad day.

Then there is the sadness with the passing of basketball great, Johnny Kerr, who will be remembered for the beautiful hook shot of the Nats mid-50s when an upstart team from a relatively small city in frigid upstate New York. He had beautiful form with his perfect hook shot, but he may be known for his selflessness as a great center passer, Former teammate, Chet Walker, described this "Johnny, in my opinion, was probably the greatest passing center in the history of the game. I'm serious. Johnny Kerr would throw the ball through his legs and behind his back and always find the open man."

The Nats won the NBA championship in Kerr's rookie season. It was the only title he would be around until Jordan's run began in 1991. What also began in Kerr's rookie season was his then-record consecutive-games streak, which reached 844 through Syracuse, the team's relocation to Philadelphia and a trade to the Baltimore Bullets. He then went on to coach the expansion Chicago Bulls and Phoenix Suns.

'Johnny has always been what Chicago is all about,'' said longtime NBA soulmate Jerry Sloan, who played for and coached the Bulls and now coaches the Utah Jazz. ''Tough, hard-nosed, from the streets and playgrounds. He took that first Bulls team to the playoffs, and no expansion team ever did that before or since. I hope they never forget that in Chicago.''

Always a pioneer and ready to face challenges, Kerr, was the rough and gentle de facto voice of Chicago Bulls basketball for 30 years and more, and was a steady and self-effacing voice, and now that reassuring voice is not being heard. Two voices of the rough and tumble of Chicago and Denver are no out there--the passing scene.
Posted by 5L at 4:24 AM No comments: