The National Pastime--Just For the Fun Of It 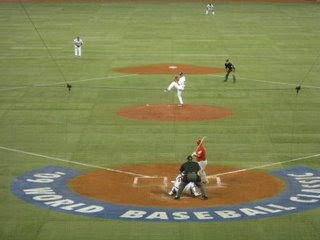 The World Baseball Classic is baseball at its most enjoyable if not at its best. It is baseball played by those who enjoy playing it and playing it for their country, rather than being played for the money--which is what Major League Baseball (MLB) is. The sense of fun and loyalty evident in the Classic is in stark contrast to the brand of ball that is played in the MLB, in which there is no team loyalty, the players are available for the highest bidder, and they do not seem to be having as much fun.

William Rhoden covered it well in the Times on Saturday, in discussing the team's shortage of first basemen, because of the demands of the MLB team owners. He quoted Derek Jeter, who also played in the 2006 Classic, who talked Friday about the honor of playing in the tournament. "Asked why he decided to play again — was it to avoid spring training? — Jeter mentioned national pride and honor.

'That’s the reason I’m here this time, not to get out of spring training for two or three weeks,' he said. 'It’s to come out here and represent our country and win a championship here. Guys obviously have their reasons for not being able to participate, but I think more players wanted to play than not.'

A consistent undertone of the Classic has been who chooses to play and who declines. The decisions underline the tension between a player’s love of the game and his profound understanding of who butters his bread.

None of the players who stayed away doubt that the Classic is fun; it’s just that fun gives way to self-interest — the teams’ and the players’.

The Classic pits the business of Major League Baseball against the intrinsic joy of playing baseball."

It is great when the "intrinsic joy of playing baseball" wins out. It should win out more, but it doesn't win out often in the MLB.