The power of music was apparent at the wonderful joint concert of the McLean High School Orchestra and the Detmold, Germany, Jugendorchester (Youth Orchestra) at the Craighill S. Burks Theater in McLean High School. The concert program, presented by more than 75 musicians of the combined orchestras, featured the music of Brahms, Mendelssohn, Bizet, and Tchaikovsky, and then an encore of music from Grease, the Musical, by Jacobs and Casey. It was a magical and emotional evening bringing two cultures together again in a series in each county that goes back fifteen years. The power of the music and cooperation building pieces of friendship, harmony, and memories for life, was magical and breathtaking.
Posted by 5L at 6:52 AM No comments: 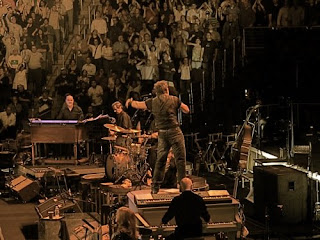 Bruce put on a great show at DC Verizon Center. As usual, he had an incredible dose of Energy, and he gave it and everything else for the audience. The song choice for requests was great, and his song choice were generally fine, but towards the end, in the darkness of the lyrics, his choices lost some of their energy and some of the incredible vitality of the singer and his audience that are usually unified. There is a fine and more complete review of a first-timer at http://www.popmatters.com/pm/review/bruce-springsteen/
Posted by 5L at 6:51 AM No comments:

The Power of Song -- L Cohen

Leonard Cohen filled the Merriweather Post Pavillion in Columbia MD, and the Washington Post provided a mainly positive review that went off on a sour note of negativity about the mix of sound and the skill of the side musicians that was unjustified. In reality, the concert was truly exceptional, with only the high ticket prices, and the rainy and cold weather detracting from a mostly magical evening.

The sound quality was as clear and crisp as a concert in a fine symphony hall; it was well beyond what I have come to expect at a rock concert. It was easy to hear Cohen's somewhat raspy voice that improved over the course of the night, and to hear the fine musicianship of the sidemen and back up vocalists and the beautiful arrangements of the songs that were close to exquisite and seemed to tightly surround the words. The sidemen added to the richness of songs and their thoughtful lyrics, and all played off the artistry of Leonard Cohen very well.

The serene yet playful 74-year-old Canadian song-poet put on a fine three-hour show (with a 30-minute recess) at the outdoor venue that was filled with intensity and easygoing grace, that complemented the meticulous musicianship. And the behatted man with the white-hair - looked alternately elderly and youthful, took turns being sad and nimble and debonair, depending on whether he's holding his fedora over his heart or wearing it on his head. He crouched through some songs as if Yogi Berra was calling a perfect game.

The crowd laughed and applauded lines like "I haven't been this happy since the end of World War II," in "Waiting for the Miracle," the elegantly stately song in which he sang, "the maestro says it's Mozart, but it sounds like bubble gum."

Cohen hasn't toured in nearly 15 years; he last hit boards when "I was 60, just a kid with a crazy dream." His stature has rightly grown as an iconic wordsmith of the first generation of rock singer-songwriters, a philosopher of love and death, sexual ecstasy, and societal doom, whose cigarette-scarred singing voice has grown more effective even as its range has become more limited.

Early on in the first set, Cohen performed "Everybody Knows," his song of political and personal betrayal from his fruitful late-'80s electronic phase. And everybody seemed happy with the turn of events, especially Cohen, who skipped on and off the stage each time he came and went over the course of two sets and three encores. (He didn't display as much gymnastic prowess, however, as the Webb sisters, who executed dual handstands early on during the dystopian "The Future," signaling that the marathon show to come was going to be as playfully theatrical as it was satisfyingly serious-minded.)

"So much of the world is plunged in chaos and suffering, it's remarkable that we have the opportunity to gather in places like this," Cohen said before "Anthem." For a guy known first and foremost as a lyricist, Cohen pays acute attention to every acoustic detail. Every song got its due, and every Hammond B-3 or sax solo - from Larsen and multi-instrumentalist Dino Soldo, respectively - came through as crystal clear as the vocals.

One of Cohen's specialties has always been writing words that are about music - music as a source of spiritual sustenance without which the soul would wither and die. "But then, you don't really care for music, do you?" he sang in "Hallelujah," issuing the ultimate put-down in a blood-and-guts version that contrasted gravely with Jeff Buckley's ethereal cover.

In Cohen's apocalyptic encore of "First We Take Manhattan," he indicated his narrator's deprived state by asking: "Remember me, I used to live for music?" And in "Chelsea Hotel No. 2," he got a big laugh for rhyming "you told me again you preferred handsome men, but for me you would make an exception." But then he cut to the song's core by singing about the gift he was giving to his reverential audience at that very moment: "We are ugly," he sang, in an unpretty voice. "But we have the music."

As newspapers shrink their staffs, all of the sections of the papers are becoming more and more interchangeable. The Washington Post recently discontinued its separate business and Sunday book review sections, and merged them into News and Outlook respectively. This is coming at a time when I often find myself reading a story and going back to first page of the section of the paper to check on what section I am reading. In USA Today terms, Life becomes Sport, or Money or News, and vice versa.

While the particular section of the paper does not really matter much, it is a commentary on today's life that items and sectors of our life are often interchangeable. Sports items are often found in the entertainment, business or news sections--sports are more and more a business or entertainment in its most commercial form. Entertainment is more and more a business if not a sport, and entertainment figures are often in the news. Recent business news often seems like the news of a sport with the chaotic rise and fall and hopefully rise again of the stock market. Life is complex but simpler in some ways.
Posted by 5L at 2:30 AM No comments: